Last month, Kate Lister, the president of Global Workplace Analytics and I gave testimony to California’s Little Hoover Commission. This hearing was called by the Commission as part of their investigation into the reality of government agencies supporting “widespread long-term telework.” In other words, what if many of those who suddenly started working from home because of COVID-19 were to continue doing that permanently?

It was a lively discussion, but before we dive into the top takeaways, it’s important to level-set.

Even people who are used to working from home are stressed and disrupted by multiple issues that have nothing to do with work-style changes. Healthcare concerns for family members, school closures, economic woes, political discourse and civic unrest are just some examples.

Next, let’s talk about terminology. The phrase “telework” is usually associated with short duration telework, granted by exception as privilege to a select few. However, in this hearing, we’re talking about long-term, long duration telework — widespread by default, not by exception.

A common myth is that “work from home” can only be done with small teams and/or for short durations (days/weeks/month-or-two). Both Kate and I have personal experience of high functioning, physically distributed teams of more than 1,000+ people for multiple years — a few for over a decade.

Short term disaster plans are common for dealing with short-term disasters, like power outages, fires, and bad storms. When there is short-term disruption for a day or two, people quickly catch up with work after they get back into the office.

In fact, the State of California was running a telework efficiency experiment when the 1989 Loma Prieta earthquake hit. Those already comfortable working from home were able to resume working quickly after the earthquake. Others lacking equipment or training, were unable to start learning to start work from home, while already trapped at home. They remained unable to work until the offices, freeways and bridges were repaired and reopened.

People depend on government services to keep running without disruption, even when government employees cannot get into their usual office. We need fault tolerant government operations. A government building should not be a single point of failure for an agency.

It’s worth noting that while “diversity” is often used in a racial or gender context, there are multiple other metrics of diversity. For example, there are those with varying abilities, including those who are blind, depend on wheelchairs, or veterans with PTSD, etc. There are 37M Americans with long-term disabilities, with 74% (29M) long-term unemployed. There are 4M Americans on the autism spectrum, with 85% unemployed for life.

Beyond that, there are many other groups who could benefit from government jobs that do not require reporting to a physical office. Those include:

Telework is Good for the Environment

Climate change and carbon emissions are a concern. The California Air Resource Board tracks the sources of all emissions across California, and here is their latest data.

While there is lots of talk about reducing methane from livestock (5.4%), flight tax to offset aviation emissions (1.1%), I’d like to draw attention to passenger vehicles. At 28%, this is the largest source of emissions across the state. Most of these are from single-occupant vehicles commuting to/from work in stop-and-go rush hour traffic, which is the least efficient way to operate an internal combustion engine.

The carbon footprint reductions from these telework policies can be measured and reported automatically. California’s Dept of General Services did this by creating a live dashboard https://telework.govops.ca.gov/tracking-telework/. Other agencies can do this, too. 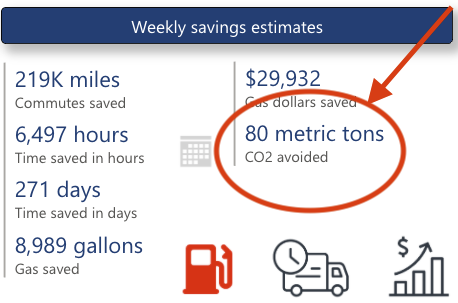 Telework is Part of the New Social Contract:

The idea of a “job for life” is disappearing with Baby Boomers’ average 4.2 years per employer across all industries. The software industry average is now under two years.

Distributed teams require explicit leadership focus on topics like delegation of authority, trust, team cohesion, burnout and isolation. All things that have been advocated for in ROWE, MBO and other management methodologies.

Before COVID-19, this workforce trend was already happening, with physically distributed private companies out-hiring, out-retaining, out-competing and under-spending their co-located competitors. Since COVID-19, this trend to distributed teams has accelerated exponentially.

The generational changes, the social-contract “no more job for life” changes and now COVID-19 put us at a unique inflection point for our society. Encouraging a widespread telework policy will help government agencies tackle climate change measurably and immediately, not five to 10 years in the future. All while reducing costs, improving disaster resilience and improving workforce diversity.

Thank you, Little Hoover Commission, for inviting me to speak and for the lively Q+A.